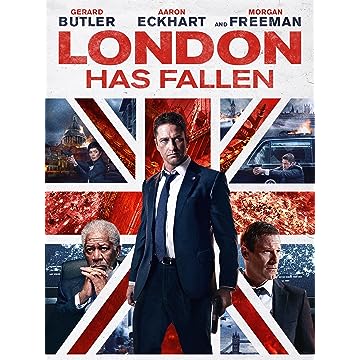 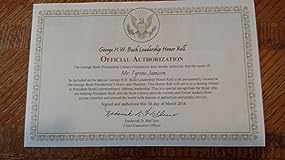 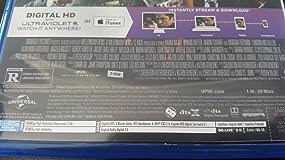 'IT'S LONDON'S TURN TO COME UNDER ATTACK'

As many suggest, in truth, the film is wildly o.t.t, however, if viewed with little expectation, it is, action-packed
and hugely entertaining....
'Mike Banning' (Gerard Butler) is bodyguard to the U.S President 'Benjamin Asher' (Aaron Eckhart)...'Mike' has
decided that it's time to walk away from this dangerous occupation and focus on his pregnant wife and forthcoming
child, he is writing a note of resignation....when a message comes through from the President, the U.K Prime Minister
has suddenly died and he has to attend the state funeral....so, the resignation letter will have to wait as he is to
accompany his boss on his flight to London.
Two years ago America had set out to kill Terrorist and Arms dealer 'Aamir Barkawi' (Alon Moni Aboutboul) and had
used a Drone to target him, however though many were killed in the compound including his daughter, the Terrorist
had survived the blast.
Upon arriving in London and making their way to the funeral - all hell breaks loose, it seems even the police stationed
to secure the area are among the attackers....the truth is, 'Aamir' had planned he whole thing with the help of his sons
including the death of the Prime Minister....it has been staged, the target - The American President.
'Mike' has to get his boss away from the turmoil as fast as he can with famous landmarks being blown up and bullets
flying they will have to fight to make their escape.
On the ground the London authorities are trying to co-ordinate restoring order, but, how did the terrorists know of the
arrangements, and how were they able to infiltrate the security cover and get so close to the visiting dignitary ?
Will 'Mike' keep his boss alive ? Will he himself live to see his new-born ?
The film has much if but unlikely action sequences along with some good visual effects as you would expect....to be
honest 'Olympus Has Fallen' is the better of the two films....however for simply entertainment purposes for
me it's a '4'
Features -
The making of London Has Fallen
Guns , Knives and Explosives. 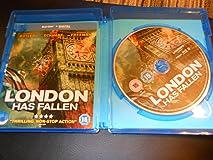 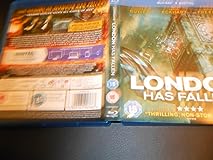 This is a great Man's Man movie.

A great man's movie. Take out the cuss words and this movie, that was not needed, and it's a great man's only movie. I say that it is only for men, these days. That's because we have so many feminist that want Hollywood to make women cops, women beating up on men (a fairy tale). I never pay a dime for them "girly" movies. This the way the real world works with violence only - it's a man's job.

This movie is action packed with just enough CGI to not take away from the movie. You real men, get this movie. 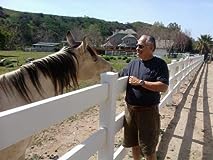