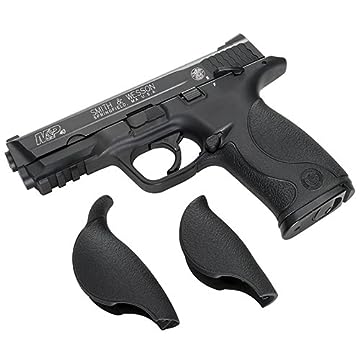 After a month or so of hemming and hawing I purchased a Umarex S&W M&P 40 (the GBB version of course) to replace my beloved Cybergun Sig SP2022. The SP2022 is a wonderful pistol, and fitted with a rail mounted laser sight it's been my "deterrent" gun.

The M&P appears to be a nice pistol, 'shoots in the 300FPS range, and the build quality seems to be pretty good.

As with all of my gas-powered guns, I had put the obligatory drop of Crosman Pellgun Oil on the tip of the first Crosman CO2 cartridge and the CO2 had leaked out over night, which did not surprise me. After installing the 2nd cartridge (it's now been 3-days) the gun sealed up fine.

I'm still learning the intricacies of the M&P and since it's Saturday I decided to spend some time today working with it.

One of the first issues to come up was upon field stripping, a small strip of silver tape was scrunched up between the slide and barrel. The only logical explanation for this piece of tape is to protect the black paint on the breech from scratches when the slide cycles. It's a "cute" idea, and I'm sure that though it works great for "demo" guns at the LSG, the reality is; That piece of tape is eventually going foul something (barrel, guide rod, or..) and most people aren't going to want to have to "field strip" a BB gun that they just spent $80.00 on. I have to wonder how many of these guns have been returned as defective due to this (as with most of the pistols that I own; I polished the breech and barrel on my M&P so I'm not concerned with minor scratches on the breech).

The BIGGEST factor that kept me from purchasing a Umarex S&W M&P 40 sooner is that in EVERY YT review it shoots low, and we're talking 2" to 4", which to me is completely unacceptable! Now what nobody realizes or makes mention of in their YT reviews (and there's no mention of it in the owners manual either) the Umarex S&W M&P 40 has an adjustable hop up adjusted by a screw in the bottom of the barrel assembly. Now I have yet to shoot any BB's thru mine, I'm hopeful that hop up is in fact adjustable to correct for elevation

One of the big complaints I've read about this gun is the the lack of a catch on the magazine to facilitate loading BB's. In the next week or so I'll try to look into it and come up with a DIY fix, do not expect the manufacturer to address it anytime soon.

Things that you're going need:
1. A good pair of shooting safety glasses.
2. A tube of Crosman Pellgun Oil (This is one of the most valuable upkeep/maintenance items that you can get for trouble free performance).
3. CO2 cartridges, I only use Crosman brand in my guns due the CO2 cartridge seals are broken in to the shape of the Crosman cartridge tips.
4. 4.5mm/.177 cal BB's. Brand is going to be your choice I have bottles of Daisy Copperheads, Daisy Match Grade Avante, and Excite Smart Shot (copper coated lead) BB's.

This gun is a keeper and is fast becoming one of my favorite air pistols. I had the opportunity to run a few magazines thru it last weekend and the gun does shoot low, I haven't had the time to modify the rear sight for elevation. The shot grouping at 30' is very good. I mounted a laser sight and a rechargeable flashlight. The gun will fit a Bulldog Cases holster (large) with the laser installed if you wet mold the holster. The loading spring on the magazine is a finger nail cracker, though using DIY speedloaders made from Bic pens it's manageable.

6-months later and I like this gun so much that I purchased another one! The first one has now been cannibalized for parts in order to convert my Airsoft (6mm plastic BB) M&P 9L Perfomance Center (Extended slide) to use 4.5mm steel/lead BB's. Though this gun is sold under the Umarex label, it's manufactured by KWC and the internals are identical. 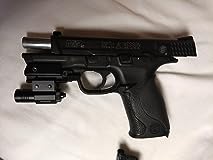 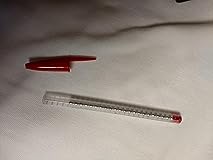 Great gun but shoots low. Luckily there is a fix!!

This is the most realistic steel BB pistol available at this time. Definitely one to add to your collection. The only problem is that it shoots 5-6 inches low at 10 yards. This makes it unacceptable as a good target shooter, but luckily I have a fix!! First of all this gun actually has a hop up. The only steel BB gun I have ever seen with one. There is a screw on the bottom of the barrel breech and I was able to screw it in a few extra turns and could see the "hop up" moving inside the barrel. This helped a little with the gun shooting low but it was still not enough. The next step in correcting a low shooting gun is to adjust the sights. Unfortunately this gun does not have adjustable sights for elevation. You can adjust windage at the front sight but the rear has no adjustment. So like in the old days to correct a low shooting gun you start lowering the front sight by filing it down. I had to file the top of the front sight down about 0.050 inches lower. This made the top of the sight right at the top of the white dot. Used a black marker to "repaint" the bare metal and cover the white dot. It will now shoot to point of aim as good as my Umarex Colt Commander and my Cybergun Sig P226 X-Five steel BB pistols. Great fun on my backyard half scale steel challenge stages!!

Perfect. I love this hand gun for running drills ...

Perfect. I love this hand gun for running drills in my yard. It's almost identical to the real thing. 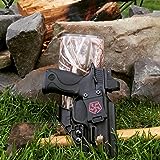 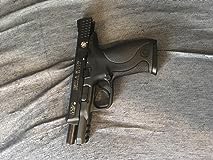 Love it probably going to buy another identical to this one

When I took the pistol out of the box, the paint was already chipping off the slide. I decided to strip the paint down to the metal and hopefully be able to paint the slide again. Overall, it is a fun pistol because it is so realistic.

The umarex m&p 40 is very nice and detailed looks and feels pretty close to the real thing. My only complaint is the magazine is very hard to load unless you have a tool Its almost impossible using your fingers to load this. I damaged my magazine trying to load it the first time because the spring kept on flinging back as I was trying to get BBs in. It would’ve been nice if they had a lock on the magazine to hold the spring back while loading.

edit after less than a weeks use
after about 4 co2 carts my gun doesnt hold the air properly. it shoots the first round and then the next shot shoots all the co2 out the barrel ive been using the umarex brand co2 carts too.

this one is worse in every aspect

Upper slide dysfunctional (upper slide doesn't close). Does not shoot. Comparing this to my colt commander 1911, this one is worse in every aspect, parts are also not manufactured or quality controlled well. Return requested.