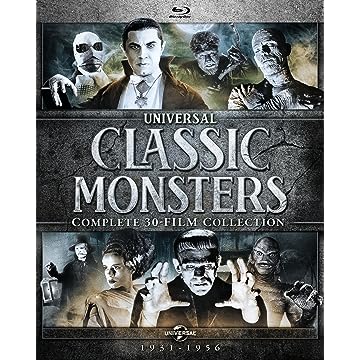 This set assembles all six of the separately available “Complete Legacy Collection” Blu-rays + the well made, yet non-essential 1943 version of “Phantom of the Opera”. If you have bought these Blu-rays separately, the booklet or the nice box that comes with this set does not justify double dipping.

That being said, this is a really great collection of Universal’s monster movies between 1931 and 1956, but it is not without controversy. One could argue that “Universal Classic Monsters Complete 30-Film Collection” is a misnomer because it omits 1920s silent films such as the original “Phantom of the Opera”.

It also omits films such as “The Black Cat” and “The Raven” which, while they’re Universal horror movies from that time frame, they lack the classic monsters and motifs of the other films. The same can be said for later films such as “Cult of The Cobra”, “The Monolith Monsters” or “The Deadly Mantis”. Perhaps these films will someday merit another expansive Blu-ray collection like this. Are you listening Universal?

People may also complain about the inclusion of the Abbott and Costello films as being non-canon. I am glad they’re included...especially because Bela Lugosi finally got the chance to reprise his iconic Drácula role on screen. They’re at best pretty funny and at worst mostly harmless, so why complain?

The biggest knocks against this set are that it’s not significantly less expensive than buying all the sets separately and that it doesn’t add anything new beyond what has already been available. If you do the math though, you’ll be spending about $5 per movie (not counting all the documentaries) which isn’t bad at all.

I bought this set because I only had a few of the individual “Legacy Collection” sets on DVD and none on Blu-ray. Knowing that I will watch many of these movies over and over again, I felt like making the investment.

Even though there is nothing new here, I’m still quite satisfied. The lack of new features and the omission of the original “Phantom of the Opera” (which would have fit easily as a special feature) is what holds my rating down to four stars. Apart from those quibbles, it’s a really nice set. 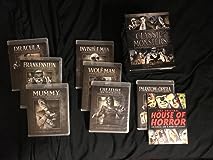 At first I was having second thoughts about buying this new set. Because I was thinking that the sequels was not going to look good as the first eight movies. I was disappointed with the 2004 Legacy collection. I didn’t like the picture Quality and I hated the double disc. I have bought the universal monsters movies on every format from VHS DVD and now Blu Ray. This new Legacy Collection boxset on Blu-ray is by far the Best these Movies ever looked.

If you are looking for the Universal Monsters and aren't sure which set. This is the one to get. No only do you get the Legacy Collection, But Abbott & Costello meet.. and The Phantom Of The Opera movie with Claude Rains (not Lon Chaney) photo of Phantom box art included. I bought the Legacy series first, Then this release, next is the Blu-ray transfer series :D

Terrible! Bought for my wife and the Mummy had only one disc in it. NOT BRAND NEW!!!! The disc holder that is supposed to go in those clips is missing and so is the disc. GRRRRR