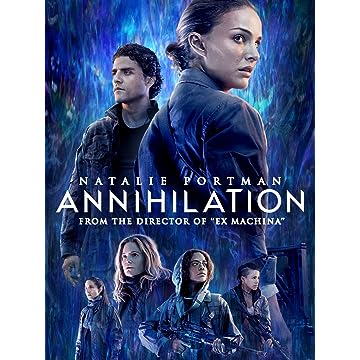 I've been looking forward to this film for quite some time. The book is one of the best I've read in a long while, and when reading it I had two thoughts. One was "this would be a phenomenal movie", followed by "I have no idea how they would make this into a movie". Sure enough, it's now been done and I think Alex Garland was a pretty good choice considering he has only Ex Machina under his belt as director. He had a fresh vision to bring to sci-fi at that time and continues to do so here. I was really excited that they got top talent to portray some of the main characters in this movie, as the book does not give the characters any meaningful "given" names. They all had titles, or nicknames, and that was it.

I think I'm biased because of my love of the book, but I don't think this really could have turned out much better. So much of the story's context is in the visuals and dialogue, or just the overall emotion of the film. If you watch some of the special features, you'll pick up on this a bit. Of course, I'd highly recommend reading the book series as well for even more depth. The grotesqueness of Area X and it's gruesome nature is really captured well enough to please fans and newcomers alike.

The 4K is not the BEST I've watched so far (in my short time as a 4K watcher), but the movie is meant to be seen this way. Considering the source material and the visuals that even that medium presents, it's not surprising that the beauty is in the fine print of the film. Tonally, it jumps around a bit but that's sort of the magic of The Shimmer and the mystery behind the story. I would describe the genre feel of the film to be a psychological monster movie, as the world and its inhabitants really push the movie forward.

I particularly loved the score and felt that it fit the movie very well. The audio plays as big of a part as the visuals, and one scene in particular with one of the monsters really shows that. This is one of those movies that will also appreciate with multiple viewings, and there is a lot of subtext and just depth to the movie that doesn't quite appear on initial viewings. This easily could have been butchered and thrown into a bargain bin from the get-go, but a really talented group of entertainers fortunately got a hold of this one for us all.

I was slightly disappointed that there were no commentary tracks on the 4K or Blu-ray discs, but the Blu-ray disc contains the special features, in which there are a few gems. It's really great hearing Natalie Portman adore this script/story like the fans did, and even some of the secondary actors really were able to capture what this story was about. Seeing one of the monster encounter scenes put together in one of the features was really interesting to see. I would definitely buy another edition of the film to have a director's commentary with Alex Garland, or even an author commentary with Jeff VanderMeer would be something really special.

Overall, I think this film is a pretty safe bet for insta-buy if you're a fan of sci-fi or creature features. It stars top of the line talent, and features an up and coming director in Garland. His crew seems to be very tight per the special features, and perhaps if this movie garners enough attention on stores shelves we can get a sequel. Or perhaps, we could do the whole Southern Reach trilogy! They really understood the visuals that the novel presents, and made the movie in a way that it can stand on its own but also pays it off for the fans. 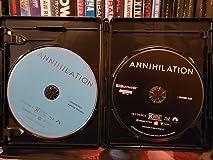 Annihilation is the reason why science fiction exists for our consumption.

Annihilation could have easily been a bad movie, I mean you have a trailer that doesn't show you much and isn't widely seen on television. A film company that apparently doesn't think the film needs any advertising dollars, and isn't released to many theaters nationwide or even worldwide whatsoever.

All of these things tell you this film is going to bomb, but you go to see it anyway because you like Natalie Portman, and what you do see in the trailer does pique your interest a bit.

And by the end of the film you are not only pleasantly surprised, but left wanting more, much more. And that is how I felt when I left the theater tonight.

First let me get this out of the way, the film is incredible. It's easy to describe, but the complexity of what is portrayed should leave you wanting more. It is intellectual, but that is not a bad word, or it should not be at least. I don't think you need an MD proceeding your name to understand the technical aspects of what the film is there to teach us, about biology, psychology, and humanity as a whole.

At times the film does become technical, however ignorance of the content at large should not make you dislike the film, only rather want to understand it a little more. But for those who despise science, or intellectual content in general, you kind of get a monster movie, somewhat and also it has some action, intermingled with dialogue and some very intense, truly terrifying moments.

It is truly the reason why science fiction exists, and why we like it as readers, and movie goers in general. It tingles the senses in all the right ways, and stimulates the brain when it needs that stimulation, but most importantly it never over reaches beyond its plot, its story, the meat of things.

And the story is very simple: There is area, called the shimmer. It grows larger with each passing day, and anyone who enters it, doesn't come back. And that by itself is the start to a great science fiction plot. And it would be easy to lose itself in a basic, sci-fi movie of the week way by throwing monsters at us, bludgeoning its cast into an ever growing body count, and tossing a little sex in there at times to keep things interesting. And for your sci-fi movie of the week that would be your average trashy B movie.

However, here it has some of these things, and still manages to give us an intelligent, well crafted, well acted, intriguing story that challenges the sci-fi movie story paradigm we are all used to seeing on screen.

My only gripe is the title, which once you have seen the film, and understand what annihilation technically means, seems as somewhat of a misnomer of sorts. It may be intentional, I did not read the book, though I just purchased the trilogy on Amazon to read very soon, but I'm unsure as to why its named as such right now.

Getting beyond that, I praise this film highly, and intend to purchase it as soon as it is available to watch on blu-ray merely to listen to the commentary while watching it again.

If you like science fiction, you should love this film.

A PASTICHE of various [and some better] movies ~ "Solaris" [USSR version], "Prophecy", "Species" [subtler], the original "Invasion of the Body Snatchers", "Prometheus/Covenant" ... NOT forgetting "The Thing" ........ EXCEPT for a stunning color palette - stellar Art Direction reminiscent of Dali's landscapes .... this one clunks along merrily, yep - a clone'ish' version of the novel ... ["Ex Machina" - although fun - was just "Frankenstein, or the Modern Prometheus" 're-imagined']. Actually, there are smatterings of Ridley Scot's "Prometheus" present too .... including a nod to the Keanu Reeves "The Day The Earth Stood Still" .....

NATALIE PORTMAN - always immensely watchable [that magnificent face that has enchanted all since 'Leon, the Professional'], plays the bemused spouse and heroine explorer [fascinating 'duel' sequence with her "Metropolis" metallic close] ....... JENNIFER JASON LEIGH - a powerhouse on screen - adds her talents ... but they're overshadowed by the remarkable "Garden of Eden" they intrude .... perhaps it's a comprehensible version of "Mother!" .... or the Mimi Rogers "The Rapture"? Since the protagonists are 'judged' according to their specific dna - and either rewarded of 'annihilated' according to the combination ..

So many symbols? The flaming Light-house - still erect and blazing with light ... the numerous gaping orifi ......a gateway to a Cocteau's version of Hades ... or Heaven?

I would have loved to have seen the initial 'victims' still alive and morphing .... instead of skeletal remains and / or a petri dish for amusing fungi ....

Perhaps even a composite entity ... ?